Army Sergeant First Class Travis Vendela deployed in combat operations in 2004 and 2006. In February of 2007, SFC Vendela was traveling via HMMWV when he was hit with a Explosively Formed Penetrator (EFP).

SFC Vendela lost both of his legs above the knee, fractured his pelvis, left elbow, spine and sustained a fractured jaw.

Today, Vendela serves as a volunteer coach for a local high school football team. He tries to spend as much time as possible in the outdoors with his wife, Tiffany, and their three sons.

The Tunnel to Towers Foundation has completed his smart home in Utah. 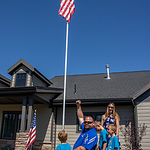